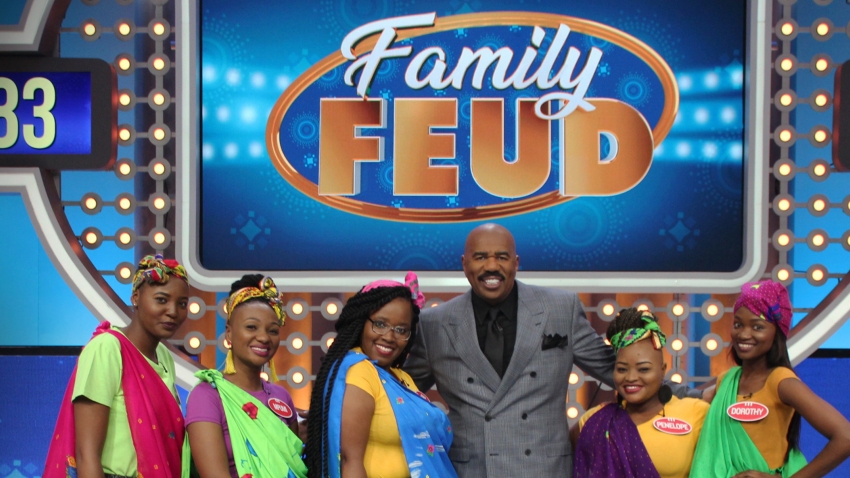 Hosted by award-winning entertainer, businessman and philanthropist STEVE HARVEY, who has been hosting the American version of Family Feud with enormous success since 2010, the 26-episode series runs until 27th September.

“I believe Family Feud will become a household name for local South African families,” said Mr Harvey. “This is just the beginning. I expect this show to lead to multiple media and business projects in and throughout the continent of Africa.”

Against the backdrop of a game show, FAMILY FEUD is really a family comedy with funny-man STEVE HARVEY embarking on a journey to learn about South Africa and its people, while two families compete to name the most popular responses to survey questions related to the country. The family that gains the most points walks away with the prize money.

KFC takes their family values to the screens as the headline sponsor. In addition to a lot of serious cash to be won, KFC will ensure that no-one walks away empty-handed and is giving away R10 000 in KFC vouchers every week to the losing family.

“We have had the pleasure of airing the American version of FAMILY FEUD on e.tv, and the response to it was phenomenal. This year gives us the golden opportunity to provide the show that we know resonates with our audience, an authentically South African twist. We believe that FAMILY FEUD SA will do well,” said e.tv Managing Director Marlon Davids.

“We look forward to the people that make up the very fibre of our society reliving memorable moments and seeing themselves on their screens interacting with the one and only Steve Harvey. Viewers should also anticipate celebrity-driven episodes that include talent from two of our local flagship productions, Scandal! and Rhythm City,” concluded Davids.

G2 Connection, which is headed up by industry experts Virginia Hollis and Gail Hoffmann Parrish, is managing the local integration and sponsorships, and have partnered with production company Rapid Blue TV.

“G2Connection is an independent media company that delivers authentic, integrated and holistic solutions,” explained Hollis. “Our primary focus is to create tangible sponsorship opportunities that are beyond a once-off investment and we ensure that our solutions leverage all touchpoints that are required to maximise value for our clients.”

Award-winning Executive Producers of Rapid Blue Duncan Irvine and Kee-Leen Irvine could not contain their excitement when talking about the local version of FAMILY FEUD.

Kee-Leen says she was most blown away by the pocket rocket that is Steve Harvey, who is a formidable combination of non-stop comedy, jaw-dropping work ethic and consummate professionalism. Kee-Leen loves that Mr Harvey embarked on a cultural journey that left him frequently amused, sometimes bemused, but always enriched.

Duncan is well known as a trailblazer in the industry, responsible for bringing most of the world’s top formats to South African screens such as SA’s Got Talent, Project Runway, X-Factor, Bachelor SA and Shark Tank, amongst many others.

It is Duncan and Rapid Blue’s reputation locally and internationally that made this partnership possible. Duncan said he is most excited by Mr Harvey’s passion for Africa and the relationship in Steve Harvey International partnering with Rapid Blue to create a broad slate of memorable entertainment. FAMILY FEUD SA is just the beginning.

The South African season of FAMILY FEUD will air every Sunday at 6pm on e.tv from 5th April until 27th September, with a repeat on eExtra on Friday nights.

Steve Harvey formed Steve Harvey Global (SHG) in 2017, to consolidate and expand his vast business and media interests. Steve Harvey Global is focused on creating and delivering entertaining, powerful and motivational content, products and experiences to inspire audiences around the world.

About e.tv
e.tv is South Africa’s biggest independent free-to-air television channel. With over 16 million viewers, e.tv appeals to all races, ages and income groups and is the most viewed English language channel in the country. It’s the absolute destination for local and international entertainment.

About Rapid Blue TV
Founded in 1993 by Duncan and Kee-Leen Irvine, Rapid Blue is a boutique, pioneering production company with an impeccable reputation for developing high-end local concepts as well as executing international formats to world-class standards. As a multi-award winning company with a passion for Africa, the team are relentless in their pursuit to entrench Rapid Blue’s position as a producer of quality, digitally-integrated content for multiple platforms throughout Africa.